I’ve been deliberating as to which pom poms I should use- an older set I already have at home (the silk fibres are a little squashed) or the newer set that I recently acquired in China. Although the older set has a few less balls and weren’t as full, the colours matched the colours of my head better so for now, I have chosen to use them. I will be back in China in the next few months so I’ll probably get another set that is newer and will work better with the lion.

Actually, now that I am looking at these images, the head is practically done!!! There are a few more finishing touches that need to be added that I haven’t done in the earlier stages like the pillow and the sequined trim around the eyes and on certain parts of the head. 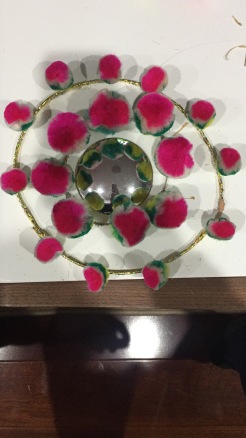 1 thought on “The Pom Poms”