Join me, as I set out to create a traditional Chinese lion head.

For those who do not know, the lion dance is a Chinese cultural art that has deep roots in Chinese tradition and values. From the colours and visual details of the lion head himself and the dance he performs there is a story of China’s arts and craft, dance, history, customs and rituals, and language.

The lion dance involves two persons who don the lion costume playing the part of the lion, and an ensemble of percussion instrumentalists who provide the rhythm and bring the lion to life.

The lion head itself is an incredible piece of multimedia art. Its basic shape, the frame, is fashioned from bamboo strips held together with paper ties. The frame is then lined with layers of paper mache. Once dried, careful painting of the lion is carried out using particular colours and patterns, depending on what story the artist wishes the lion to convey. Colour schemes often depict certain characters from the Chinese history Romance of the Three Kingdoms. Finally, the ornaments are attached, such as pom poms, animal hide, and the mirror. Current trends see the frame being made of rattan or PVC pipes to make the lion head more lightweight and hence easier to dance with, but nonetheless the end result is as equally majestic.

In the olden days, a kung fu school would demand respect through its lion dance. Any master’s school and his members would be judged by the strength of their lion dance skills. As such, during that time the lion was made to appear fierce and powerful. The schools strived for the lion to be given life (sang) and ferocity (mang) through their dancing, easier to achieve when the lion head looked the part. Artists of these older lion heads had these aspirations and created masterpieces. Like any true artist, they gave the creation process time, patience, and effort, excelling in the art to make beautiful lion heads.

Over the years the lion has evolved, reflecting changes of attitude toward kung fu schools and the way the schools view the lion dance. With nearly no competition among kung fu schools the lion dance is no longer perfected as a martial representation of the school, but rather danced for the school to gain popular attention in the community for its own promotion. Some have branched out to include styles of dance that attempt to combine the life-like movements of the lion with impressive acrobatic tricks, such as hopping across a line of high poles. The appearance of the lion head has also changed; his facial expression and ornaments are softer and rounder, no longer looking frightening but rather looking cute. The colours and patterns are also less rooted in China, but have been influenced from other Asian countries such as the currently popular Batik motif. The lion tails have also changed, older lions having brightly coloured and decorated long tails compared to the new tails which are duller and greatly shortened in length. The cuter and more adorned new lion with its short tail makes it a better candidate in lion dancing for show and performance competition.

Like most lion dance enthusiasts, my own foundation of the lion dance comes from my kung fu. I practise Dragon Style Kung Fu and my school dances the lion in Hong Kong style. The Hong Kong style favours the old fierce lion, in both the artistry of the lion head and the mostly grounded movements. Too many of the current made and danced lions lack the viciousness and intensity of the traditional lions, once which were the soul of the kung fu school.

My aim to recreate a traditional lion head- a young Liu Bei coloured by the rainbow and edged with thick black bristle fur, his long tail flapping behind him as he is once more awakened. 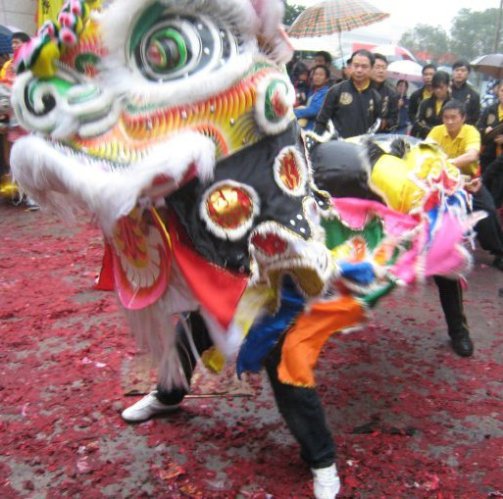