I’ll preface this post by thanking my kung fu senior Pan for his help in getting me this tail!
Getting the tail was not really the next step on my to-do-list but none-the-less, it was the next step forward in my lion coming together. And it was quite funny how I came to have the tail.

During the last month, I managed to get away from Sydney and travel to Vietnam and Hong Kong.

I knew that Vietnam was the place to get very cheap (pricewise) lion heads and so potentially lion head parts. I ended up wandering around Cholon (in Saigon) and stumbling upon a few lion head shops that sold lions and dragons to…… funnily enough… a couple of the kung fu schools that are running in my area. However, the style of lions that they made were the new fluffy lions with short tails and lots of sequins. Not really what I was after and to top off my dejection and not finding what I wanted that said it would be difficult for them to make a long multicoloured tail due to lack of materials. Everything else they had on offer by way of pom poms and fur was just not available. Not to discredit the lions that they made, but they just didn’t have what I was after.

However, I had plan B….. Hong Kong. I had contacted one of my kung fu seniors in Hong Kong beforehand to see if he could help me get some lion head parts for my lion. He said that if I managed to get a Chinese visa in time, he would take me into Canton to where some of the lion manufacturers are so I could tell them and see for myself what they have on offer. I was so excited about the prospect of seeing for myself some of the pros in action but unfortunately, the cost of making a Chinese visa at such short notice would have cost me a lion head in itself!!!
Again I felt bitterly disappointed and not getting the supplies that I wanted.
That’s when my senior said, oh by the way, I have a tail that I managed to salvage from one of the old lion heads that they were throwing away at the school that I work at. You can look at it and throw it out if you dont want it. It’s tattered and not in the best condition…………………..

This is the tail that he showed me. =D =D =D =D EXACTLY what I was after in such good condition. Almost all the bells are still attached, all the metallic discs are still there, there are no rips in the fabric, the colours are still vibrant, there’s a “sausage” spine the stretches through it. 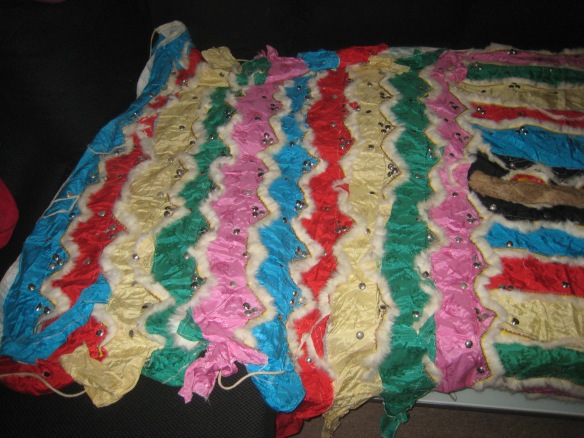